It’s a tough issue, but schools and parents need to find a balance to protect students

The recent Fast Company article, The spy tech that followed kids home for remote learning—and won’t leave, isn’t the first time this topic has hit mainstream news. When the pandemic drove students to remote learning, many school districts rushed to provide their students with school-issued computers. As a result, school districts became more responsible for monitoring online activity to protect students from online threats, including cyberbullying, exposure to explicit content, and more. This began long before COVID-19 took over our lives, but the shift to digital monitoring grew significantly during the pandemic.

The Children’s Internet Protection Act (CIPA) is a big reason why. Districts are responsible for complying with CIPA by monitoring online student activity to protect them. However, some groups want to revise CIPA to indicate that it doesn’t require broad and constant monitoring of students’ online behavior.

Other reports raise concerns that low-income students and districts are being more closely monitored than their higher-income peers. As reported in the K-12 Dive article, Report: Monitoring online student activity may create privacy disparities, this also leads to lower-income and minority students being more disciplined for online behavior.

There are further concerns that school monitoring stymies students’ ability to express themselves creatively or think critically. Many privacy advocates are also worried that it’s grooming a generation of citizens that are used to and accepting of monitoring, which could lead to greater privacy and autonomy controversies in the future.

The question is what do we have to give up in exchange—and is it worth it? The controversy isn’t over. There are well-meaning people on both sides. But, school administrators, parents, and students who know first-hand how intervention can truly save a life will tell you that it is. We hear it over and over again. Saving just one kid’s life is worth it to them.

That is probably why a survey conducted by the Center for Democracy & Technology found that 78% of teachers and 75% of parents strongly or somewhat agree that monitoring keeps students safe by identifying toxic online behavior. It’s been shown time and again that technology can be an aid in student suicide prevention, and in cyberbullying and school violence intervention in a way that does save lives.

Additional research has shown that bullying, cyberbullying and student cyber safety are strongly related. Bullying is found to be at the root of problems like poor grades and attendance, substance abuse, self-harm, suicide, and even school violence. Further, it’s not just the victims of bullying that suffer. Bullies themselves are also often struggling with issues that manifest into bullying behavior, often with tragic outcomes themselves. It’s critical to find a balance between cyberbullying monitoring and student privacy to keep our students safe.

Why is cyberbullying such an insidious type of toxic online behavior?

It’s because when a student is bullied, either online or off, that student is much more prone to developing a host of significant problems that don’t just go away when they go off to college. It can affect the rest of the student’s life.

The effects seem to start with reducing the bullied student’s ability to learn. The Cyberbullying Research Center reports that 64% of the victims of cyberbullying don’t feel safe in school, and aren’t able to learn as well as they did in the past.

Another study conducted by Ditch the Label identified even more disturbing consequences for students being bullied.

Bullied students tend to skip school more often and they have lower grades and other negative learning outcomes. Letting cyberbullying continue, when we have the ability to spot and address it, is putting our students’ mental health at risk. This is something that neither district leaders nor parents want to tolerate.

It’s true that cyberbullying monitoring has both good points and bad. Let’s take a look at both sides of the issue, which are pointed out succinctly by a study conducted by T74, a non-profit, non-partisan news site covering education in America.

Adding to the downside of monitoring is the issue mentioned earlier. There are concerns about low-income districts being able to monitor more of a student’s activity because they are using school devices.

Cyber safety monitoring can’t be abandoned. Students know that they can’t expect privacy on school applications or devices provided by schools. And, districts can’t ignore the safety risks that exist in their own applications. In many cases, monitoring finds indicators of cyberbullying, self-harm, or suicidal thoughts that are legitimate cries for help. We can’t let those cries go unanswered.

Everyone understands that monitoring can’t be a substitute for the care of parents, guardians, teachers, coaches, peers, or counselors. But, if we can use technology to provide visibility into our students’ world to spot problems that adults may not see, then we need to find that balance between things like cyberbullying and student privacy. It will help our young people avoid mental health problems and reach their potential. 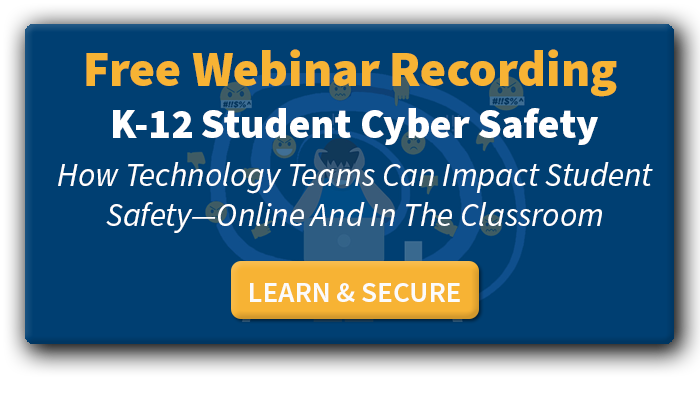