There’s some pretty dark stuff on the internet – that much we all know is true. But inappropriate content in your school district’s cloud environment? That’s a harder pill to swallow.

The sad truth is that many school Google and Microsoft 365 domains are littered with inappropriate content. Whether it be explicit, violent, or sexual, many school districts are unknowingly storing a lot of dangerous material. To make matters worse, this is putting you at serious risk of noncompliance.

But the good news? We’re here to give you peace of mind. We’ll explain everything you need to know about remaining CIPA compliant in your cloud services, including the types of content you’ll need to eliminate, how CIPA relates to data security, and the tools you need to clean up this mess.

Compliance in the cloud You’re likely familiar with the Children’s Internet Protection Act (CIPA). And if you are, you probably know that it’s been a long time since it was originally signed into law in 2000.

It’s no secret that a lot has changed since then, especially in the past few years. Not only are students now native to the internet, but their school districts are also taking the cloud by storm. When cloud migration accelerated during the pandemic, many districts raced to adopt new applications, but few adopted cloud security to match. With the vast majority of school districts now operating in the cloud, according to EdWeek Research Center, only 30% have the necessary tools to keep it protected.

What does this mean for CIPA compliance? That’s where it gets complicated. Technically speaking, CIPA doesn’t contain any language that specifically regulates school-provided cloud environments directly. But because the cloud is inherently online, CIPA’s regulations can be interpreted to cover your cloud applications, too.

CIPA compliance is especially important if your school district participates in the federal E-Rate program. All participating schools must adhere to CIPA in order to receive any discounts. In fact, you’re required to educate students on the basics of appropriate online behavior, including internet safety and the dangers of social networking websites.

Long story short: CIPA’s reach has expanded. The cloud services you use internally could now be under the same scrutiny, but without the same content filtering protections as your other network resources. With the influx of harmful content tech teams are seeing in their domains, it’s never been more important to stay on top of compliance and monitor your Google Workspace and/or Microsoft 365.

Before you can scrub your cloud environment of any CIPA compliance violations, you need to know what you’re looking for. Here are a few basic types of content regulated under CIPA – all of which could be sitting in your cloud storage as we speak:

There are a lot of ways that students might encounter such risky content throughout your district’s cloud apps. The Federal Communications Commission (FCC) – the administrative authority that oversees CIPA compliance – expects you to adopt and implement an internet safety policy that addresses those various channels. This not only includes email but also chat apps and other forms of digital communication.

It’s not uncommon for students to communicate through cloud applications like Google Docs, Chat, or Gmail. Believe it or not, students are frequently using these services to “sext” with their classmates – a risk that, in turn, could mean your cloud is becoming a cache for child pornography and sexually explicit imagery depicting underaged children.

That’s a scary thought to ponder for any school district, but it’s far from the only threat putting you at risk of CIPA noncompliance.

The importance of data security to compliance

Data security and privacy are often the two most overlooked aspects of CIPA compliance. Because student safety and well-being are typically the highest priorities (as they should be) data protection falls under the radar for many districts (which it shouldn’t).

The FCC, however, takes data security very seriously. According to CIPA, school districts are expected to address:

And one of the biggest ways that the cloud could you put in violation of these expectations? Third-party applications.

Students often install unsanctioned third-party content, applications, or browser extensions. In doing so, they could be inviting unseen malware, viruses, and other malicious attacks into your cloud environment. Worse yet, there’s no telling what will happen when someone obtains unauthorized access to a student’s personal information, including their financial information or home address.

Of course, students and staff may also accidentally leak sensitive data outside the district. According to the Government Accountability Office, 25% of school data leaks are accidental – 84% caused by internal staff members.

Unfortunately, most school districts lack the appropriate cloud application security needed to prevent such events from happening, thus exposing them and their students to risk.

Supporting compliance with a cloud-based solution

The thing about cleaning up your cloud environment is that it’s not as easy as sweeping it under the rug. Though the problem may be out of sight, it’ll surely rear its ugly head sooner or later and put your district at risk. That’s why you need cloud data loss prevention (DLP).

Cloud DLP is a tool for monitoring and mitigating risks within your cloud environment. It not only protects your students from data breaches or leaks but also helps your district remain CIPA compliant in a number of significant ways:

At ManagedMethods, we understand that navigating the cloud environment is a daunting challenge. That’s why our cloud security platform is designed to help you organize your security posture, mitigate risk, and promote internet safety. 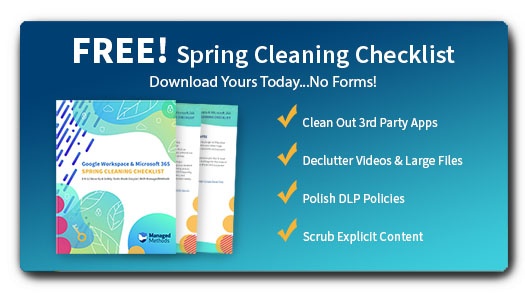