Growing up isn’t always easy, especially when you’re a young person experiencing so many things for the first time. Not only are kids navigating the trials and tribulations of school, they’re also simultaneously juggling family, social engagements, and their own personal lives.

Consequently, it’s not uncommon for this balancing act to take a toll on a student’s mental health. And if things go from bad to worse, they may even start considering taking their own life.

As a school district, it’s your responsibility to protect students from harm in every shape and form — suicidal behavior included. But exactly how prevalent is student suicide? How many students are at risk? And more importantly, what can staff do to prevent suicide in their school district?

In this blog, we’ll answer those questions and tell you what you need to know about youth suicide prevention.

The first thing you need to understand about youth suicide is how it differs from suicidal ideation.

In any case, it’s important to get ahead of teen suicide before suicidal ideation devolves into an actual attempt. To do this, let’s take a look at the facts.

The Prevalence of Youth Suicide

When you look at the data, it’s plain to see that suicidal behavior is an emerging crisis among American youth.

Why is Teen Suicide on the Rise?

In truth, there’s no way to blame a single risk factor for the increase in youth suicide. However, it’s clear that the pandemic had a significant impact on student mental health.

CDC data indicates that in the first eight months of the pandemic alone, the number of mental health emergencies — including self-harm, suicidal behavior, and depressive episodes — increased by nearly 25% for children aged 5 to 11 and nearly a third for those 12 to 17.

Pandemic-related school closures disrupted stability in the lives of many students. Suddenly, they faced social isolation, more time around their families, and more time dealing with the potential troubles therein.

Who is at Risk of Suicide?

Verywell reports that the suicide rate is four times higher for males than females, with male deaths making up almost 80% of all suicide deaths in the United States. However, females attempt suicide three times as often as males.

According to the CDC, lesbian, gay, and bisexual kids are about four times more likely to attempt suicide than heterosexual kids. A Black student is also more likely to make a suicide attempt than their Hispanic or white peers.

Risk Factors Your School Should Know About

Youth suicide doesn’t just happen. More often than not, a young person considers taking their own life after experiencing one or more stressors. Although by no means is this an exhaustive list, here are some potential risk factors that could lead to suicidal behavior:

Responding to a Student’s Suicide

As difficult as it might be to imagine, there may be a day when your school district has to manage the aftermath of a student suicide. It’s a delicate situation, which means you want your staff to know exactly how to respond.

First, understand that a completed suicide attempt will likely have ripple effects across your school district. Exposure to teen suicide has been shown to increase the risk of suicidal ideation in the rest of the student body, especially for those close to the victim. Therefore, it’s crucial you provide access to the necessary grief management services on campus.

For instance, when you inform the community that a student has passed, be sure to also inform them where they can seek help. Offer them sessions with a mental health professional or school psychologist with the skills to help them through this process.

In the weeks following, provide suicide awareness education to all staff and students. Discuss typical warning signs of suicide so that they know how to spot them. Make sure you’re using careful language to describe suicide and take care not to trigger youth who may be sensitive to the topic.

The best thing your school district can do to curb the crisis is to start proactively preventing suicide. To do this, you’ll need to know a few suicide prevention strategies.

Let’s examine that last strategy further. How does monitoring the cloud help with suicide prevention? The short answer is simple: a cloud monitoring solution like ManagedMethods can help you identify risk signals before it’s too late.

With this type of platform, you can automatically detect when students are discussing suicide or self-harm, as well as stressors like cyberbullying, violence, or substance abuse. Whether it be in a Google Chat, Doc, or a Onedrive folder, cloud monitoring can pick up on a risk factor and alert your designated staff member. In turn, you can investigate an incident with speed and provide students the help they deserve. 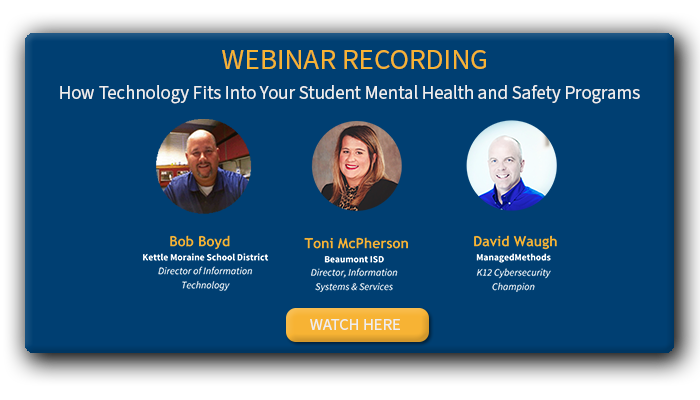