West Rusk County Consolidated Independent School District is a small Texas K-12 district dedicated to the education, health, and safety of its 1,047 students.

As the district’s Director of Technology, Cody Walker is responsible for everything related to technology. From day-to-day network operations and in-class support, troubleshooting issues with Google Classroom and other apps, to implementing and maintaining cybersecurity policies.

Beyond his role as a tech director, Walker is one of those people who is truly dedicated to the safety and security of his students.

Like many districts, West Rusk migrated to Google for Education to reap the cost and collaboration benefits. The cost of their old solution was increasing, while Google didn’t cost much at all for schools.

“Beyond the cost savings, we’ve seen a huge increase in collaboration and communication since our move to Google Workspace. Particularly as we began using Google Classroom more,” says Walker.

As a savvy Director of Technology who understands that his district’s data and technology is critical infrastructure, Walker uses a multi-layered cybersecurity tech stack to protect it. He uses a firewall to protect his network and a content filter to protect his students from accessing harmful content on the public web.

But, as the saying goes, you don’t know what you don’t know. Walker was trying his best to use the security features provided natively in Google Admin Console.

“We relied heavily on Google Vault, which we still do to a degree, but it’s no security tool,” he recalls. “It has no active mitigation or response functionality. That was all left up to me to stay on top of things, which was very challenging.”

While Walker wasn’t paying anything extra for Google’s native security tools, he felt like he was definitely getting what he paid for. “We didn’t pay much, and we didn’t get much.”

Then, 2020 happened. Like most school districts, West Rusk had to completely change the way they taught students and did business.

“Among the challenges we faced was being able to secure these accounts when our students and staff were away from the school building. These accounts went from only accessible on-site to always available,” explains Walker.

Overall, the sheer amount of time that it took Walker to manually manage the various risks to the IT infrastructure—from malicious phishing and account takeover attacks, to data loss prevention, to student safety—became a real challenge. Not only was Walker working hard to identify and mitigate these risks, but the thought of not knowing what he was missing was nagging him.

“We’d never used a tool quite like ManagedMethods before, but it did replace the process of how we managed accounts both on and off-site,” says Walker. “It’s much, much better now and doesn’t involve nearly as much human activity to ensure that our students are safe.”

They say that the one thing money can’t buy is time. But, when you find a way to automate processes and streamline tasks more efficiently, that will get you pretty close to buying time.

“When it came to purchasing a tool like ManagedMethods, there was really no internal resistance or lack of support from administration,” Walker recalls. “ManagedMethods came in at such a great price that, compared to the amount of time we were putting into our current process, it was a no-brainer for us to move forward.”

For Walker, implementing ManagedMethods was fairly easy, particularly when compared to other cloud-based products. He didn’t have to make many changes to his current setup or install any hardware. However, after activating his 30-day free trial, the platform did bring things to light that made him realize there were some security settings and processes he needed to re-configure.

“While we didn’t have to make any changes per se, there were a lot of security problems that were brought to light that we were unaware of,” he recalls. “The scariest of them all was the number and types of connected 3rd-party applications to our faculty accounts. It was a huge security loophole that we had no idea existed to the extent it did before ManagedMethods.”

“ManagedMethods is going to be your best friend. In the beginning, it will relay more information to you than you want to know. But they have an awesome team that stands behind their product. I know a lot of vendors say that, but it’s the truth. From sales to support to the follow-up afterward, they’re committed to helping their customers.”

Since becoming a customer in the fall of 2020, Walker has been able to set up and adjust his risks and policies so that the platform runs without a lot of input from him. Not only does this save him an extraordinary amount of time, but it also helps protect the privacy of West Rusk ISD’s end users.

Depending on the type of policy violation ManagedMethods detects, alerts may go to different administrators. If it is a data security issue, Walker receives an alert directly with the information he needs to get to the root of the problem and mitigate it fast.

If it’s a student safety issue, the alert is routed to the appropriate building, counselors, and/or school resource officers to address according to district policies and procedures.

“We had one unfortunate incident occur where some students decided to participate in the ‘devious licks’ TikTok challenge where students trash the school bathroom. The district sent out an email offering a reward for anyone who came forward with information,” says Walker. “We had a student who came forward with information, but accidentally hit ‘reply all’ to the email which meant other students received it as well. Using ManagedMethods, I was able to remove the student’s reply from all the email inboxes that it shouldn’t have gone to within minutes.”

ManagedMethods also helps Walker with phishing and malware detection and remediation. One recent incident occurred when a coach sent an email containing a phishing link from outside the domain to another coach inside West Rusk’s Google domain.

“The email was very well crafted and it gave the external account access to all our internal account’s contacts. All those contacts got spammed, then all their contacts were spammed. And it got a bit out of hand really quick,” Walker recalls. “Using ManagedMethods, I was able to identify all the emails that were in my domain’s inboxes as well as those that were sent out and get them eradicated within about 20 minutes.”

“It was a pretty hectic 20 minutes,” he chuckles. “But we were able to get everything pulled out of our domain, everyone’s inboxes that were affected were wiped clean of that email, and then we were able to block the domain all within about 20 minutes. Had we not had ManagedMethods, I don’t know how I would have been able to get that removed. It would have been a very manual process that would have involved disabling accounts.”

Time is a precious commodity. Particularly so for resource-strapped technology departments that are pulling triple-duty in a drastically changing education landscape. Layer on top of that the critical element of detection and response time to cybersecurity incidents, and you have a nearly untenable situation in K-12 school districts across the country.

Does Cody Walker think his investment in ManagedMethods is worth it?

“100%,” he says. “ManagedMethods has saved us on so many occasions on information that we would not have known about. From the security and safety risks that have been mitigated to using it to help us troubleshoot Google Classroom, Shared Drives, and Gmail problems during COVID-19, I use ManagedMethods more than I use Google Admin Console.”

Today, Walker can’t imagine doing his job without being able to use ManagedMethods.

“You’re going to remember a time before you had ManagedMethods, and then you are going to appreciate how good and useful it is now. If you don’t have a CASB, you definitely need to invest in one and I recommend that you invest in ManagedMethods,” Walker emphasizes. “It is the right price for the number of features and functions. But also for the people that stand behind the product. Being able to pick up the phone or send an email to someone there that you know, that’s in the same boat that you are, and speaks your language is huge. ManagedMethods has a fantastic support team that actually engages with their customers.” 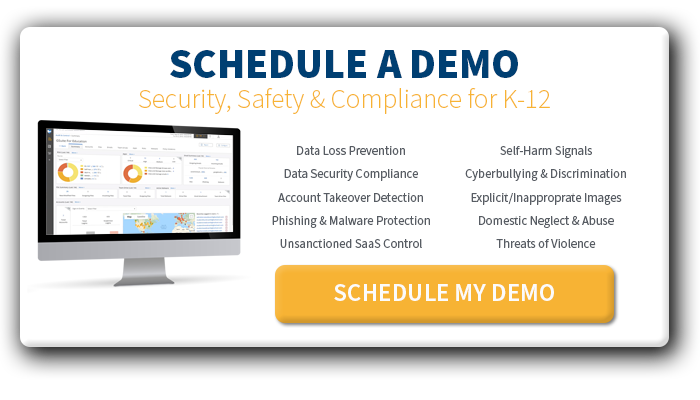