What Are Cloud Data Breaches?

What is a data breach? A data breach occurs when information is exposed or taken from your systems without your knowledge or authorization. Cloud data breaches simply refer to the exposure of data that is stored and shared in your cloud applications, such as Google for Education and Microsoft 365.

Cloud data breaches have similarities and differences to data breaches from on-prem servers and information systems. One of the main differences is that cloud data breaches can be more difficult to detect and remediate. This is because the data lives outside of your network—in the cloud—and those in charge of district data security often have less visibility and control over cloud apps. This is particularly true if you’re only relying on native security tools, such as those provided in Google’s Admin Console.

There are three common causes of data breaches that haunt district IT teams.

For most districts, protection against data breaches takes the form of network security such as firewalls or MTAs. Those same districts are using cloud applications such as Google for Education and Microsoft 365 to store and share sensitive data. Network security doesn’t protect these cloud applications. If you don’t have zero trust cybersecurity protections in place, this data is at a high risk of exposure.

How Do Cloud Data Breaches Relate to Student Data Privacy?

It’s impossible to ensure student data privacy if that data is subject to cloud data breaches.

When a data breach occurs, personally identifiable student data is often exposed. There is also the risk of exposing other types of sensitive data, including employee PII, W-2, and other tax information, and district financial information.

In 2019, 60% of all school cybersecurity incidents involved a data breach.

Perimeter-based security doesn’t sufficiently protect access to the district data that is in your cloud apps. The data is stored in the cloud, not on your network or on-premise server. Therefore, the data is outside of your network and isn’t protected by your network security.

Further, access to the data is increasingly originating from outside of your network. This was already the case before COVID-19 induced remote learning and working. The pandemic simply amplified and accelerated this behavior. Student data privacy in remote learning will be an ongoing problem. In many cases, you simply have no control over access to your district’s data.

Cybercriminals will get past your perimeter security using phishing, social engineering, weak passwords, or risky 3rd party apps. Once they’ve managed to take over user accounts, they can use the permissions of those accounts to have free range within your cloud apps.

You also have nearly zero visibility or control over staff members who send or share sensitive and protected PII improperly. Whether that sharing is due to ignorance or accident, it’s still creating a massive student data privacy liability.

EdTech security risks are even more complex due to the existence of “shadow” EdTech. While you may be putting procedures in place to control the EdTech brought into the classroom, there are still applications that users may be able to connect to your district’s cloud environment using OAuth that you don’t know about. These risks can include account takeover, data loss, and general disruption of the classroom.

OAuth is handy for users. They can access applications using their credentials from another application on a different server rather than creating a new login. OAuth uses access tokens to log in to the new application.

Unfortunately, OAuth risks exist because a hacker can easily create an app to obtain access tokens from unsuspecting users. Hackers can gain access to your applications while avoiding password and two-factor authentication protocols. They can also accomplish this by exploiting a legitimate application’s security vulnerabilities. 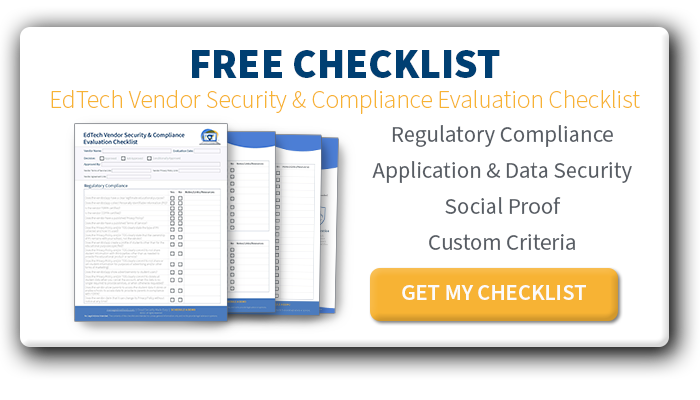 5 School Data Privacy Risks And How To Prevent Them