Firewalls do a good job of identifying suspicious activity on your network, and you’ve probably been using them for years. The question for many K-12 leaders is, “Is a firewall the right technology to protect against the rising number of cyberattacks against the education industry?” Today, the answer is, “No, not all by itself.”

A recent K-12 Cybersecurity Cost Report by CoSN (the Consortium for School Networking) uncovered two top firewall concerns among K-12 IT leaders. While completely valid, these firewall concerns don’t even scratch the surface for what IT teams in districts should be thinking about in cloud computing and remote learning security.

The good news is that CoSN’s report found that virtually all school districts are using some type of a firewall.

The disturbing takeaway from this finding is that, while a majority of school districts are using cloud applications—mainly Google G Suite and/or Office 365 as their data hubs—only a small minority (3%) are using any kind of cloud application security.

While virtually all districts are using a firewall of some type, almost none have a cloud computing security layer in place to secure the sensitive data stored in G Suite and/or Office 365 for Education. This is understandable because there are several common misconceptions that are driving this trend amongst K-12 cybersecurity managers.

Let’s set the record on these cybersecurity myths straight. Just using content filtering and firewalls leaves a big hole in your district’s cybersecurity infrastructure. Why? Because firewall technology hasn’t kept up with the needs of K-12 schools who are using cloud computing with G Suite and Office 365.

What Are the Top Firewall Concerns for K-12 IT Leaders?

1. Lack of Time and Staffing: A firewall can only alert administrators of problems that it finds. School employees must act on those alerts. What IT leaders indicated in the survey is that they often don’t have the staff with enough time and the expertise required to monitor and react to firewall alerts. Without that staff involvement, the usefulness of a firewall is greatly reduced.

2. The High Cost of Advanced Capabilities: Another concern expressed was the cost of using a firewall to its fullest. Respondents noted that a standard firewall provides some type of intrusion detection or prevention and rules-based access management. Capabilities such as data loss prevention and monitoring encrypted traffic are often add-on services that they usually can’t afford with their budgets. The CoSN survey results didn’t address two other top firewall concerns. Which is a concern in itself. It creates a situation where K-12 leaders seem to be unaware of the gaps in their cybersecurity tech stack that can hurt their ability to secure student, staff, and district data.

The first missed firewall concern is one that wasn’t on most people’s radar until just a couple weeks ago. It’s that your district’s firewall becomes significantly less effective once the student leaves the school’s network. This is particularly true if your district doesn’t have a 1:1 program and students are using personal devices to access resources stored in school G Suite and/or Office 365 environments. In a remote learning environment, your IT team has significantly less visibility and control over data being accessed without a cloud security layer in your cybersecurity infrastructure.

Another firewall concern is the effect it has on network speed. A firewall works by inspecting every transmission that enters or leaves the network. Taking time to do that inspection slows down network speeds. The result is that the end-user suffers. Delays and interruptions in the classroom make it difficult for teachers to do their jobs and for students to learn efficiently. This becomes an increased concern if your district is moving to remote learning, where different teachers and students will have varying degrees of internet connectivity strength.

The most critical concern that K-12 leaders didn’t mention is the fact that firewalls in any form can’t secure data stored, accessed, and shared in G Suite and Office 365. Is this lack of concern hurting you and other leaders? Yes, it is.

Not all of the increase is due to the limitations of firewalls. Human error causes some of the problems and some result from misconfiguration of the software. Cybercriminals attacking schools more often also contributes; schools are prime targets because of their poor security history. You can’t control the cybercriminals or eliminate human error, but what you can control is protecting your cloud applications like G Suite and Office 365.

Firewalls provide perimeter security for your network. However, there is no perimeter in the cloud. To protect data in G Suite and Office 365, you need API-based cloud security that adds a new layer to your cybersecurity tech stack.

Whether K-12 leaders know it or not, here’s a summary of the top firewall concerns for your remote learning plans:

The current crisis and the shift to remote learning is a huge issue that has blindsided the nation. The dedicated staff in K-12 school districts have taken on a Herculean task to transition to remote learning at a moment’s notice. Though there are always going to be bumps in the road with a transition like this, everyone who has taken part to make this happen are among the true heroes of this crisis.

To help K-12 IT staff make sure that exposure of sensitive student, staff, and district data doesn’t become a self-inflicted wound in this critical time, we’re offering ManagedMethods K-12 cybersecurity & safety platform for free until May 31 for K-12 school districts that are new to ManagedMethods. If your district is using G Suite and/or Office 365 for Education, you need to think beyond the firewall. Sign up today to get the most value out of this offer. 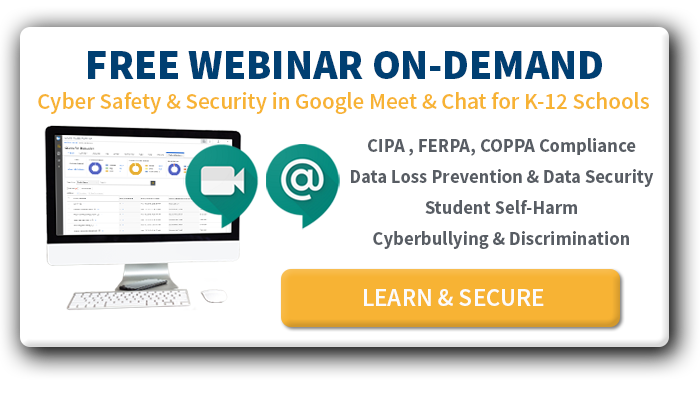