So, your chairs are stacked, desks are empty, and you’ve almost forgotten the taste of cafeteria potatoes. How was your school year? Students aren’t the only ones letting their eyes weld shut in the sun as the last nine or 10 months really sink in.

Yet as we reflect, it’s worth looking past the highs and lows of the classroom – at your cloud security too. 2022 was a landmark period for cyber risks in education. At the start of the school year, Microsoft Security Intelligence revealed that 5.8 million ransomware attacks hit educational targets around the world, an astonishing 63% of all recorded incidents. Forbes also reported on the worrying rise of cybercrime in schools.

Meanwhile, 2021-22 still had to contend with older problems – students sharing passwords, losing devices, and accessing sites they shouldn’t. These issues are a fact of life in K-12 schools. They even affect staff. Yet in some ways, they’ve changed too.

As the final bell rings in your ears for the summer, let’s look at what may have been threatening your cloud security this year. From there, we can think carefully on how to make your information and network safer, improving defenses next term and beyond.

The state of cloud security in K-12 right now

As we’ve said, 2021-22 was a significant school year for cloud risks. Cyber criminals and nefarious organizations are more likely than ever to train their sights on you. Why? Because in the wake of the pandemic, countless schools have immersed themselves in cloud networks.

But as adoption has swelled, so has the attack surface – your potential points of invasion. You might want to think of every device (or endpoint) as another expansion of territory. When another endpoint links to the network, it widens the ways in which someone can break in. Groups with names like Dark Overload – yep, really – are terrorizing more and more schools, compromising data before demanding a ransom. These attacks disrupt schools enormously, and sap hundreds of thousands of dollars from local districts.

In fact, the problem’s so bad that the Biden administration couldn’t ignore it. In October 2021, the President signed The K-12 Cybersecurity Act, a major push for federal attention on cybercrime and education. “My administration,” he promised, “is marshaling a whole-of-nation effort to confront cyber threats.” The Department of Homeland Security now has a wealth of advice for schools to stay safe online, helping plan and implement cloud protection that holds up.

However, challenges abound for using cloud computing well without slipping up. Some of the more persistent cracks in the education sector’s cloud security include:

By grading the risks you’re facing, we can begin to understand what matters most for your cloud security. Here’s a top-to-bottom list of progressive threats.

That’s enough studying for now. What insights can we take from everything that’s happened in the last academic year?

As large as the terrain for cyberassaults might be, it will continue to expand. More devices, users, and applications are joining the cloud. Your own school isn’t likely to be an exception.

Students and staff will want to work on several devices, check background material on their phone, connect with tutors if they’re sick, and tap into resources for exam periods – all part of the cloud habit.

We should celebrate this trend, even as we admit that cybersecurity programs are struggling to keep up with wider attack surfaces. Your security should be a step ahead of the amount of endpoints it’s meant to protect. Plan for a larger network than you have, instead of scaling reactively.

2. Sophisticated phishing is your key concern

Whether it’s masquerading as attachments, file extensions, streaming links or password alerts, phishing and malware are becoming tougher to spot. Even more so than ransomware, it can worm past security checks, appearing as something your students and staff should trust.

Phishing education has never been more important. Neither has advanced cloud threat detection, which wheedles legitimate messages from those that seek to do you harm. You may want to explore spoof intelligence, reviewing internal and external domains, or implicit authentication techniques. These bring up as much information as possible about who, where, and what is tied to an incoming message.

3. Funding can hold you back, over and over again

EdWeek has already reported on the funding disparities between American schools in 2021-22. Simply paying for good facilities, teachers, and extra-curricular tools is hard enough.

Cybersecurity investment isn’t matching the real danger every school faces, because they are more concerned with balancing the books elsewhere. Yet a compromise or breach can undo all of that good work.

The question remains: How do you reach for first-class security that doesn’t burn a hole in your finances? Stay with us. We’re about to show you.

Looking ahead – your plan for the fresh term

With so many threats just beyond the digital equivalent of your school gates, it’s tempting to spend the summer in crisis. The task ahead may seem huge. But cloud security doesn’t have to keep you up at night. We’re ready to safeguard your network with threat intelligence and detection – specifically for Google Workspace and Microsoft 365.

We’ve designed it specially for K-12 institutions, so you’re never in the dark for network oversight. On a single dashboard, you’ll see every real-time risk to cloud sharing, remote access, applications, chat features, and school emails. There’s automated risk protection against malware and phishing schemes. As soon as something’s flagged as a threat, it’s stamped out, with zero delays to your network.

Microsoft and Google Workspace are the crux of cloud learning support. Thanks to ManagedMethods, you can switch between them, guarding breaches at every level. We’ve made sure it’s affordable too.

As the new term approaches, give your cloud the silver lining of protection it deserves. Let’s make 2022-23 the year where schools fight back. 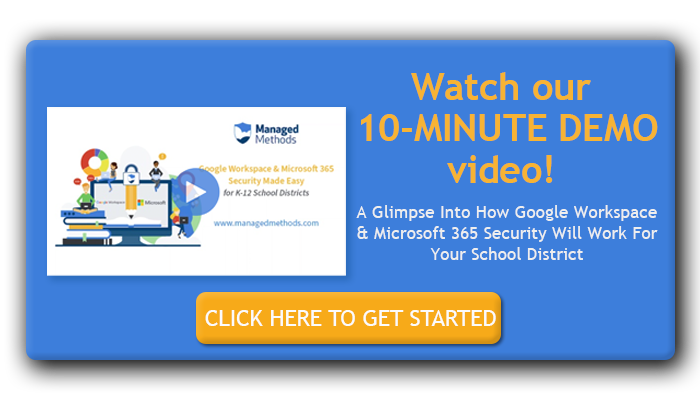