Why Early Threat Detection Is Important In K-12 Cloud Security

Cloud security is a lot like running a race. The faster you are, the better.

But unlike the typical marathon, there’s no reward for finishing in second place. Instead, there are serious consequences, especially when you’re protecting sensitive student data.

Simply put, time is of the essence. That’s what makes early threat detection an absolute must-have for any school district. Unfortunately, it’s a skill that’s not easily mastered and not one that comes naturally to every IT department.

Luckily, technology is on your side. Here, we’ll explore the importance of early threat detection, why it can be difficult to implement, and what your school can do to mitigate cyber risks with speed and confidence.

What is early threat detection and why does it matter?

Early threat detection is the ability to identify a cyberattack in progress and intervene as quickly as possible. Think of it like this: If you owned a boat and found holes in the bottom, you’re better off patching them before it’s too late. Before you know it, you could be taking in too much water and it’s only a matter of time before you’re at the bottom of the ocean.

The same concept applies to cybersecurity. When your security team notices a vulnerability early in its lifecycle, you have more time to fill in the gaps, put a stop to the threat, and rebound to a state of peace and quiet (relatively speaking, of course…) Not only will this save you the mayhem of having to scramble together a last-ditch effort to secure your data, but it also keeps the damage to a minimum.

Why does that matter? Because when you’re talking about K-12 cybersecurity, unseen threats can quickly balloon into major problems. Here are just a few of the potential threats and vulnerabilities you should be aware of:

If any single one of these threats goes undetected, it could easily spiral into a significant incident. Take phishing scams, for example. From 2016 to 2020, the median amount of money stolen from school districts during phishing attacks was $2 million, according to K12 SIX research. The cost of one incident, per the report, nearly exceeded $10 million — a record high.

Unfortunately, it usually takes far too long to recognize a cyber incident. According to IBM, it took an average of 277 days — about nine months — for organizations of all types to identify and contain a data breach in 2022. Considering that enterprise resources generally tower those of K-12 school districts, that’s an alarmingly long period of time.

IBM’s data also indicates that shortening the time it takes to identify a breach to 200 days or less (still a significant amount of time) can save the victim money. In fact, on average, organizations that do contain threats in less than 200 days save upwards of $1.2 million during the incident.

But the cost is just one measure of an incident’s impact. Districts also need to be wary of the unseen risks that could be lurking around their cloud domains pertaining to student safety. For example, signs of self-harm, suicide, and bullying may be hidden in cloud activity, such as a student’s Google Doc or email. With mental health constantly making headlines, schools can only imagine the impact of a student’s well-being going from bad to worse.

Part of the problem is that detecting cyber risk isn’t easy, especially for a K-12 institution. In fact, according to Edtech Magazine, 44% of school districts need help with early threat detection.

Why? Firstly, few districts understand the specific obstacles associated with cloud security. As a matter of fact, Edweek Research reports that the majority of schools aren’t spending enough on protecting data stored in their cloud domains, such as Google Workspace and Microsoft 365.

Unfortunately, many schools don’t realize that their network security doesn’t extend to the cloud. Consequently, they lack the necessary capabilities that would allow them to identify threats originating in the cloud environment. This scarce visibility prevents IT administrators from efficiently monitoring their domains.

While cloud services have built-in security measures, these tools are usually limited. They approach the domain from a 10,000-foot view but are incapable of telling you the whole story. When it comes to student safety, privacy, and security, you need all the details to investigate properly and reach an appropriate resolution.

To make matters worse, many security teams are stretched too thin. With thousands of students whose activities should be accounted for, not to mention hundreds of teachers and staff members, the sheer volume of data that needs protecting is astounding. A typical school district simply doesn’t have the workforce to comb through data manually and spot anomalous behavior before it’s too late.

Simultaneously, cybercriminals are becoming more sophisticated. Not only are there more potential threats than ever before, but they’re also constantly evolving and outgrowing standard cloud security systems. With cloud computing on the rise, remote learning now a valid option, and BYOD programs commonplace, attack surfaces are at their peak.

Here’s the good news: Plenty can be done to level the playing field. With a few tricks up your sleeve, you’ll have no trouble mitigating threats quickly and effectively.

When many school districts think about cloud security, they may not realize that there’s a breadth of tangible steps they can take to jumpstart their program. Best of all, none of them require a substantial investment of time or money.

Here are a few best practices you can use to enable early threat detection in your district:

How to detect threats early with cloud security automation

Automation is a security admin’s best friend. Why? Because not only does it streamline many of your most critical security processes, but it also amplifies the power of your team.

Consider this: Organizations that had a fully deployed AI and automation program were able to mitigate a data breach 28 days faster than those that didn’t, again according to IBM’s study. This saved them over $3 million in costs.

That’s the power of an automated cloud security platform. Take ManagedMethods, for instance. As a cloud monitoring and data loss prevention (DLP) tool, ManagedMethods can optimize every stage of the cloud incident response process:

That’s just a glimpse at the power of an automated cloud security platform like ManagedMethods. For an inside look at your district’s Google/Microsoft security and safety gaps, sign up for a free risk audit today! 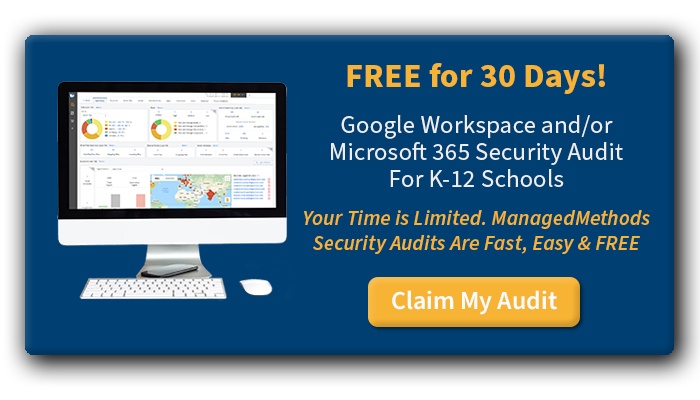 8 Guidelines On How To Handle Students’ Personal Information

What the TikTok data privacy settlement means for your school district